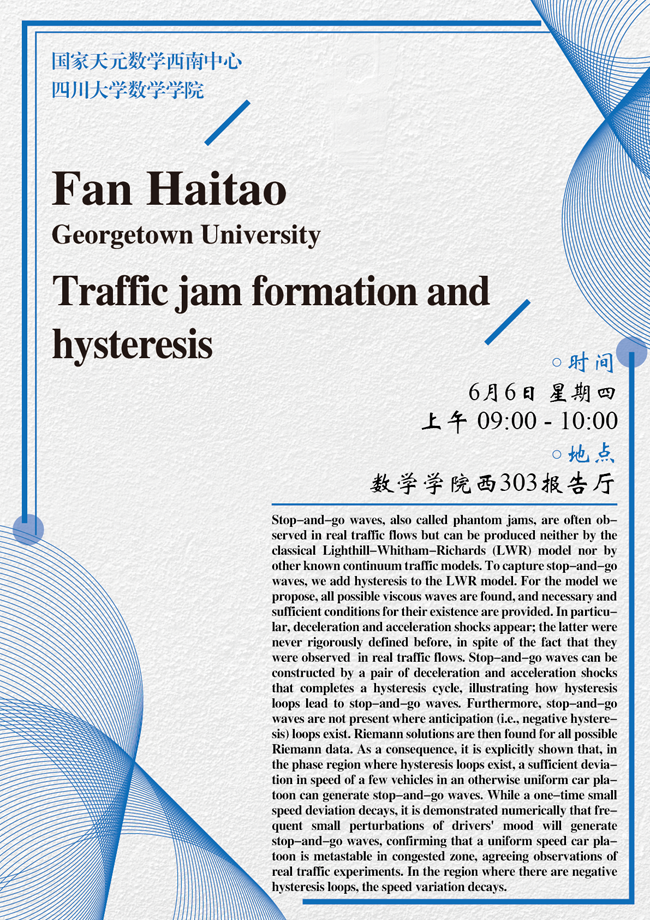 Stop-and-go waves, also called phantom jams, are often observed in real traffic flows butcan be produced neither by the classical Lighthill-Whitham-Richards (LWR) model nor by other known continuum traffic models. To capture stop-and-go waves, we add hysteresis to the LWR model. For the model we propose, all possible viscous waves are found, and necessary and sufficient conditions for their existence are provided. In particular, deceleration and acceleration shocks appear; the latter were never rigorously defined before, in spite of the fact that they were observed  in real traffic flows.Stop-and-go waves can be  constructed by a pair of deceleration and acceleration shocks that completes a hysteresis cycle, illustrating how hysteresis loops lead to stop-and-go waves. Furthermore, stop-and-go waves are not present where anticipation (i.e., negative hysteresis) loops exist. Riemann solutions are then found for all possible Riemann data.  As a consequence, it is explicitly shown that, in the phase region where hysteresis loops exist, a sufficient deviation in speed of a few vehicles in an otherwise uniform car platoon can generate stop-and-go waves. While a one-time small speed deviation decays, it is demonstrated numerically that frequent small perturbations of drivers' mood will generate stop-and-go waves, confirming that a uniform speed car platoon is metastable in congested zone, agreeing observations of real traffic experiments. In the region where there are negative hysteresis loops, the speed variation decays.